tbh Arthur spent enough time explaining why LB is net good in all the chats, also there have been a few posts that sum up the info
So right now it’s mostly either a NL-give-us-a-choice camp or those who have a strong opinion and won’t listen to any explanation
I’m gonna only touch the second camp here
AFAICT it is split into two parts, no-LB(minority) and no-tzbtc(majority)
We do have a really poor choice of assets on tezos now, tzbtc isn’t perfect, others are even worse
It kinda comes down to a decision whether subsidizing a xtz\tzbtc pair is ok enough or we should wait an undefined amount of time until a better asset comes to tezos
And IMO a bird in the hand is the right way. besides we’re seeing some efforts to make tzbtc more available, flat curve amm announced. I’d be happier if entities behind tzbtc pushed its listings on centralized exchanges but I guess we have to admit the reality tezos is gonna tezos

Thanks Gabriel for wrapping this up!
That’s exactly what’s needed,
with this proposal the no-LB supporters who have no skills to code or even verify the code themselves have an option they asked for from a person who is trustworthy and respected in the community
And thanks for you time and effort, the more we grow the more developers will be able to help us strengthen the governance and the ecosystem

Thank you @galfour. I am on board with all your points.

The thing is, Tezos governance was designed to be a political space, and this means we have to “play politics”. This means putting the arguments forward and educating decision-makers (i.e. bakers)

We are off to a good start with your post, with the interview from @murbard and the xtz.news deep-dive. Let us make sure we continue advocating why we think tzBTC LB is the best way forward on all channels.

This was a thought provoking post I saw on the main Tezos subreddit, before it was censored.
———
Psychological analysis of Ithaca opposition

This post isn’t meant to debate the merits of LB or non-LB, but rather to explore the driving force behind the opposition to LB, which I argue, is actually much larger than just LB. I suggest that those opposing LB, causing Ithaca to fail, are more motivated by the broader economics of the XTZ ecosystem, rather than single issue LB voters. Please review the following tweet prior to reading the remainder of my post, as it helps thread a narrative I believe explains the true opposition to LB.

Really, read the tweet, it’s pivotal to understanding the psychology behind the opposition to LB, an opposition so intense it caused a network upgrade to fail.

I argue, that the same people that opposed LB so fiercely, would, in fact, be staunch proponents of the same exact proposal if XTZ were >$50. When you dig down into what the opposition is actually saying, this is what it all boils down to. LB isn’t actually the issue. The economics of XTZ is the issue. Until we see improvement of this metric, I fear that this faction will become increasingly obstructionist, even to the point of inflicting damage on the network as a misplaced form of retribution.

If you didn’t read the prior tweet, now is a good time to do so.

The radical, minority faction of the Tezos community that blocked Ithaca is gaining strength and adherents as the economics of Tezos fails to remain competitive in the crypto sphere. How much stronger will they be in 6 months, if Tezos economics fail to improve? Will they begin obstructing all network upgrades, or worse, rally for radical action as we saw with eos?

For the strength of the network, it is absolutely imperative that we focus on the economics of Tezos, with future upgrades incorporating mechanisms which directly result in value accrual to XTZ. Failure to do so will result in further fracturing of the community, potentially with unrecoverable detrimental effects.

Additional agreement Gabriel
Small precision, no DeX of Tezos benefited from the liquidity baking today. It represents a derisory volume on Quipuswap and nothing on Vortex / Plenty
Hence the need to choose well
Ping @KevinMehrabi

Thanks for your post. Full disclosure upfront, I am one of the owners of Kryptstar and we voted “nay”.

I fully agree with the benefits of LB and support LB in principle. As far as I can see, few people, if any, are against LB per se in this debate. The “kerfuffle” arose purely because the Ithaca proposal bundled a protocol update with an extension to the LB sunset period, which was perceived as trying to steamroll through the sunset extension. To be clear, this bundling is the reason Kryptstar voted “nay”. (I cannot speak for the reason PosDog and other “nay” voters had).

Thank you for your plan to put forward a new Ithaca proposal without the LB sunset period extension. That’s all we (Kryptstar) wanted and we will vote “yay” for such a revised proposal.

We can then have a separate discussion about the future of LB. The current implementation of LB (tzBTC/XTZ pair) has issues around the choice (or lack thereof) of asset pair, transparency around the economic beneficiaries and the escape hatch mechanism (virtually impossible to reach threshold in practice). I look forward to a constructive debate around how to improve and implement a better LB going forward.

Next time, it would be great to ask your delegators.

I’m very happy to take my delegators’ opinions into consideration when casting my vote. But if they care about how I vote then it is their responsibility to reach out to me and let me know their opinion.

LB is not about benefits for any dex or dexes altogether.
However if a dex has an xtz/tzbtc pair it’ll be arbed with the LB DEX, more volume and fees for lp token holders

You can publicly publish your intention before casting vote. Then you will see.

This is one of the biggest challenges of tezos this year.

For the strength of the network, it is absolutely imperative that we focus on the economics of Tezos, with future upgrades incorporating mechanisms which directly result in value accrual to XTZ.

What do you suggest?

As announced earlier, I built a no-LB branch. Here are the relevant pieces of information:

How can I view the code diff between yours and what NL published?

You can check the latest commits made by him in the commit history, he just changed the sunset block of the tzBTC LB, just a variable change. 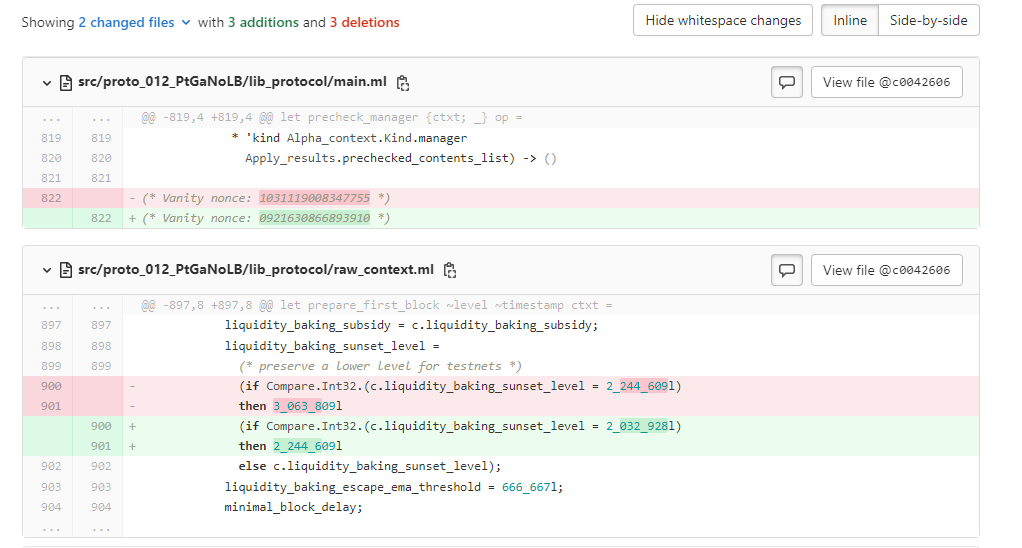 Exactly.
More specifically, reverted the commit that postponed the sunset.

If you are talking about Kryptstar, we had an active discussion in our Telegram group and mostly everyone was on board with our decision. We didn’t do a “twitter” or “reddit” poll because they can be easily manipulated.