Concurrency is a notoriously hard problem in Computer Science. In a concurrent system, you usually want to run multiple pieces of a program in a dynamic order, which have access to some shared memory. Those conditions violate many assumptions that are made when reasoning about classical programs. Reasoning about the evaluation order and memory ownership (who can modify some piece of memory) require careful analysis, rather than relying on simple patterns.

But however hard concurrency in regular systems is, blockchains make it much harder:

Because of this, concurrency is expectedly a pain point for most blockchains, That’s why I believe it is worth its own discussion in Tezos.

In Ethereum, contracts can call each other’s methods, like a regular function call. This infamously led to a lot of problems, to which different mitigations (rather than full solutions, due to the not-self-improving nature of Ethereum) have been developed.

Tezos aimed to avoid this by using a message passing architecture. Concretely, it means that a contract can not directly call another contract, unboundedly yielding its control flow. This makes moot a lot of Ethereum mitigations by default, such as:

On top of this simple message passing architecture, Tezos has a few more features/quirks related to the interaction between smart-contracts.

Tezos’ ordering of contract calls is quite unusual. Let’s consider this following chain of execution:

(This is similar to a BFS of the call graph. The usual order is DFS)

Tezos’ has two ways to authenticate transfers’ emitters in smart-contracts:

I do not know when you would use SOURCE, and my recommendation has usually been to always use SENDER. Indeed, relying on SOURCE for authentication makes for a ripe target of usurpation (the source calls A, which then calls B and makes it seem like the source meant to call B).

Theoretically, all the results of the execution of a smart-contract are known in advance. But practically, it is much easier to check who you directly call than the whole list of called contracts.

In the example from the BFS section, reasoning about what happens is fairly easy. Each contract processes its inputs, changes its state, and then calls some other contract. There are no cycles (ie, a path where A calls B, B calls C, C calls ..., and ... calls A back).

However, recursie calls happen quite regularly. For instance, when a contract queries some information from another contract. Let’s consider the example where a contract B holds the balances of contracts, and contract A needs to know its balance. It will often look like this: 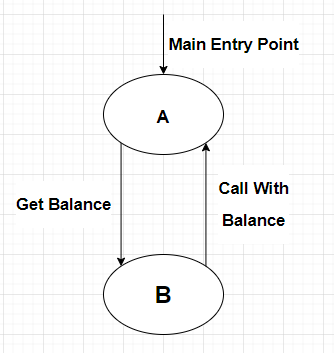 There, it’s not so good anymore. There is a cycle (A calls B and B calls A). Everything has become much more complicated:

We can see here that even with a Closed World Assumption, reasoning about multiple smart-contracts that you control is not straightforward. This makes such interactions error-prone.

With an Open World Assumption, we are getting into the adversarial realm. We have seen that even with the CWA, interactions can be hard to reason about. However, in an open world, everything becomes much harder. If we continue with our previous example (A and B), then, we must also take into account that:

The Open World Assumption is actually even more unforgiving. For instance, if a contract gives 1000tz to someone revealing a hash-preimage, that contract should factor a non-trivial commit mechanism. Else, bakers could simply censor the reveal operation and take the 1000tz themselves.
More attacks (on Ethereum) are described here. The one we mentioned is also common with Ethereum and is called Front Running.

Having such a document that people have to learn by heart, and to which more is added to as attacks are discovered, is exactly where I do not want Tezos to end. Whenever you are thinking with an Open World Assumption, you are actually never really safe. You only operate following guidelines, hoping that they cover all attacks.

In upgradable systems, it’s actually not that big of a problem (except for 0-days). You can just upgrade your software whenever new attacks are discovered. This is not possible with blockchains.

If part of this complication stems from using a Message Passing Style and BFS, then why not move Direct Call Style and DFS? The answer is two-fold:

I will discuss here some solutions. They are not necessarily mutually exclusive, and none I believe is a silver bullet.

It was discussed before, but we could copy Ethereum.

Concretely, this would mean using a Direct Call Style and DFS. However, it is still easy to shoot yourself in the foot (and thus requires following a lot of ad-hoc rules, added over time), and is not compatible with sharding.

A simple mitigation of the problem would be to use Direct Call Style only in a limited setting.

I have identified one limited setting that seemed both safe and useful. It is described at length in Read-Only Calls. It consists of a direct call to another contract in order to get some data out of it (no mutation being possible).

I am waiting for feedback from other core developers before merging it or ditching it.

Another mitigation would be to expand on the SENDER mechanism. This gets us something close to Capability Based Systems. It is been discussed on the Contracts Signature post (which I prefer to call “stamps”). I have worked on a WIP MR (which already features a prototype and a test). I am waiting for more feedback before putting more deep work into it.

I will likely make another post to explain the precise problems it solves, the design space, and the choices that I have made.

A proper solution would be to design a sound framework in which one can confidently write concurrent smart-contracts. Whether it should be implemented as an amendment, in high-level languages, or both, remains to be decided.

I have knowledge of different approaches that could be used to design such a framework:

I by no means consider this research exhaustive. I do not have time to do a comprehensive overview, but follow pointers people link to me.
What would be good would be to have more people collaborate and research on this issue.

I hope this served as some introductory material about various aspects of concurrency on Tezos.
In the meanwhile, before better solutions are developed, I recommend to smart-contract developers to avoid complex interactions between smart-contracts as much as possible.

If you happen to necessarily need complex interactions between smart-contracts, please reach out here.
If you want to participate in an effort to alleviate one of these problems, please reach out! I would love more people working on core matters.

I think the problem we are trying to solve is to guarantee atomicity when performing an atomic transactional operation involving multiple contracts.

A contract can spawn a new transaction with involves multiple contracts by creating multiple invocations (operations) for other contracts to be executed later ( (P,S) -> (operations, S) ). Breadth First Search (BFS) guarantees that the sequence of operations will not be interleaved with other operations which can alter the state of involved contracts. List of operations returned by a contract may be considered as a transaction that modifies a global state (state of multiple contracts) from one consistent state to another consistent state.

There are two discussed approaches to obtain states of other contracts:

But both of them do not guarantee transaction consistency.

There are three contracts A, B, C representing accounts with some balances that have nat %deposit and nat %withdraw entry points. A manager contract M has a nat %transfer entry point that withdraws specified amount from account A, splits it and deposit split amounts to accounts B and C.

In the beginning and in the end of execution of the sequence [A, B, C] all account are in consistent state. Some operation D1 is executed after the transaction [A, B, C] finishes.

Now, let’s assume that contract B %deposit entry point wants to create another operation that depends on the state of contracts A and C (SA, SC, SB) -> (operations, SB).

If we use callback style view entry points, the problem seems to be solved. The state of contracts A and C is inspected after the transaction [A, B, C] finishes:

But the callback style has drawbacks mentioned above:

The solution proposed below tries to address weak points of both mentioned approaches.

In modified example %deposit to an account B created delayed transaction which invoke contract F with parameters based on balances of accounts A and C:

My name is Margarita Capretto and I am doing research with prof. Cesar
Sanchez at the IMDEA Software Institute.

We are working on different lines of applications of formal methods
for Tezos smart contracts, including (1) verification of Ligo
contracts and (2) runtime verification for monitoring contract
execution (for example for preventing pitfalls dynamically).

While writing some smart contracts and trying to prove some properties
about them, we thought about some extensions to Tezos:

We can discuss particular examples if you wish.

The benefit of a view to call something like get_balance on a token contract is synchronizing the state of that token contract (even if it’s an intermediate, temporary state) with the current contract. The reason this does not work well in BFS is that BFS fundamentally wants you to write asynchronous code, with the benefits that it lands itself well to shard and the drawback that, well, it imports all of the complexity of sharding where it might be superfluous.

Thinking about the proper “pattern” for doing get_balance safely in BFS with a token contract, it seems like the answer is a two-phase commit:

This is essentially how you’d implement it if these were living on two different shards, and it’s probably the frame of mind to adopt whenever there is a cycle in the call graph. That is, unless one uses synchronous views for instance.

In the absence of views or other synchronous mechanisms (e.g. DFS calls) it would be useful to adapt the token standards to this pattern. This would suggest:

The pattern would then be to

This approach seems to create the very same problem for the children/grandchildren operations which the proposal tries to solve. I think instead, any operations produced by the delayed transaction should be put in the end of BFS queue, just like any other operations.

To solve the problem of dirty writes, a contract developer should use CAS (compare and swap) design pattern when producing an operation to change other contract state that is based on the previous state.

Further, I think that the following three building blocks can be used to achieve coordination:

I think one part of the problem is that while Tezos message passing model handles concurrency it gives you no tools to do so comfortably. Contracts are very similar to actors and there are quite a few successful actor frameworks around.

Something comparatively simple like MailboxProcessors in F# would go a long way. Here is a functional wrapper for the far more elaborate Akka framework Akka in F#

Hello, I am doing a PhD on smart contracts and would like you to help me get some documentation or blog link on the following topic: Risk Analysis of Attacks on Orchestration Interactions from Smarts Contracts.
It is about demonstrating the existence of risks in the interaction between smart contracts.