Dappetizer 2.0 is another major milestone in the development of Dappetizer, our contract indexing framework for Tezos. We are excited to share that the new version is now available, with new improvements and many hotfixes. In addition to running Dappetizer standalone, you can also now run Dappetizer inside a Taqueria project! You can check the changelog for the full list.

Taqueria is a comprehensive smart contract development framework for Tezos that takes you through the entire lifecycle of a blockchain project: initial scaffolding, development, testing, deployment, and beyond. We’ve been working directly with ECAD Labs, the awesome team behind Taquito (and now also Taqueria), to integrate Dappetizer as a plugin. This allows the contract development process to now include fully customizable contract indexing.

Taqueria is still under development (in the Beta stage at the moment). The integration has not yet been finalized, but it can already be used in new and existing projects.

Getting started with Dappetizer in Taqueria

In this example, we will start by scaffolding a new project with Taqeria:

This initializes the Taco Shop scaffold, which includes a simple smart contract that we will index. After the project is initialized, we can install the Dappetizer plugin using

Now we will start the taqueria sandbox and deploy the sample smart contract:

We can then generate our indexer based on the contract we just deployed to the local sandbox:

This will generate a full indexer in the indexer folder, with indexing logic to be implemented by you. You can check out our quick start guide on how to write contract indexing logic. 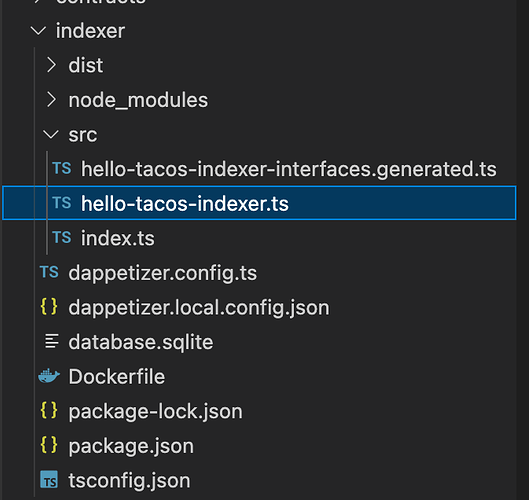 Now to build the indexer, we can use

The indexer should now be running on the local sandbox. Any time you update the smart contract, you can simply run:

This will sync the indexer configuration with the latest deployed smart contract and update the generated files.

Our many thanks go to Tezos Foundation for supporting this project and to everyone who provided feedback!

If you want to let us know your suggestions, ask a question, or want to say “hi,” come join us on our Discord server!