The Tezos blockchain has the ability to evolve with technological developments through an on-chain governance mechanism : Amendment proposals can be brought forward by injecting the source code that would implement the amendment (and registering a content hash of that code).

This is a true asset as it makes Tezos future proof and fosters the spirit of a truly decentralized open source community ! However, there is a risk of this asset to become a liability that beats Tezos at its own game (maliciously or unintentionally): 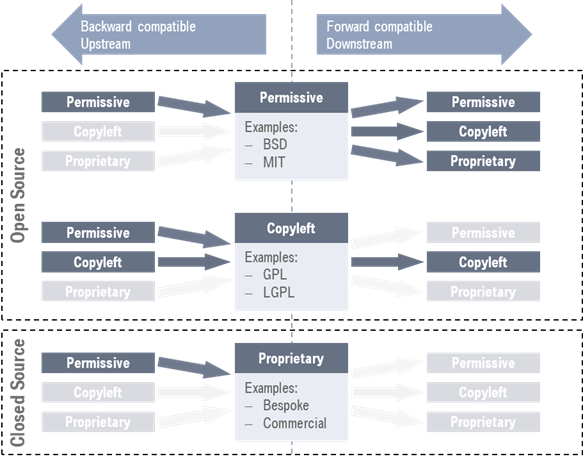 Figure 1: Classification of open and closed source software licenses and their respective forward and backward compatibilities with other license types. Source: https://softdev4research.github.io/4OSS-lesson/03-use-license/index.html

Now a modern piece of software is increasingly complex and builds upon existing and well-tested libraries as much as possible. In general, this is a good thing: reuse eliminates waste and is thus more efficient and software that has been excessively tested and used in other contexts is less likely to contain bugs or behave in an unintended way .

But there’s a catch: if software dependencies are used whose licenses are not compatible with the software using them (whether that happened intentionally or unintentionally), a lawsuit might entail.

In the case of Tezos – assuming the current codebase is “clean” in terms of license violations – the danger of “bad egg software dependencies” (i.e. dependencies that are not allowed under the MIT license) entering the codebase stems from the “uncontrolled” development and injection of amendment proposals as illustrated by Figure 2. 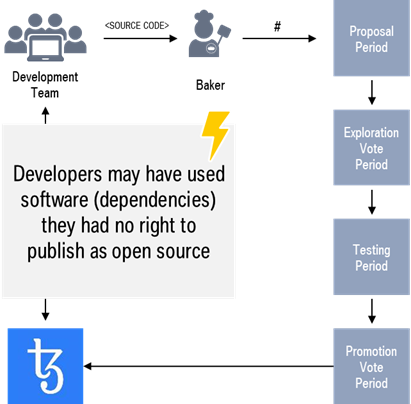 As Tezos is a decentralized network , there is no one governing body or legal entity that is liable for the code, but we imagine that plaintiffs and courts would find something to assert their rights/let justice rule.
We are no lawyers (or legal experts in any matter), so for the lawyers out there – who would be endangered by a license violation? :

Regardless of the answers to these questions, we think the Tezos community should do everything in their power to prevent license violations in the first place . Of course, that starts with the careful and responsible use of software dependencies by any development team. However, all humans make errors and just appealing to development teams won’t prevent possible malicious actors from intentionally hiding a “bad egg” in an otherwise sound amendment proposal that stands a real chance of getting promoted.

A second measure that would mitigate the risk but not solve the problem altogether, is for the community to increase awareness for the topic in general and consciously incorporate checking of license issues in their activities when evaluating the published source code of an amendment proposal.

Maybe blockchain-based license management could be an option for the future. But for now, we believe the combination of two measures could provide an acceptable protection from license violations and entailing legal uncertainties: 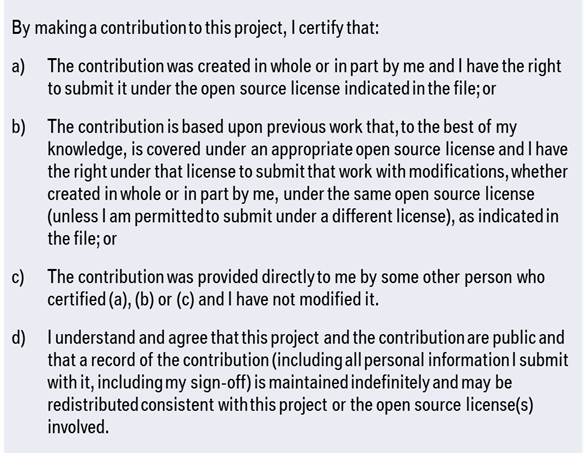 Figure 3: Example of a Developer Certificate of Origin. Source: https://elinux.org/Developer_Certificate_Of_Origin

These measures and among them especially the second one, would in turn limit developers’ possibilities, but we think it’s a reasonable proposal and to the best of our knowledge already considered a “best practice” – what’s your take on the subject? Especially lawyers: How do you evaluate SPDX as an option? …and the community at large: How could these measures efficiently be integrated into the existing process?

It’s good to explore this topic, I just want to point out that this is not a Tezos specific issue or an “on chain governance” specific issue. It can affect any open source project. Decentralized blockchain projects are particularly sensitive to this issue because it’s impractical to quickly roll back code. It’s especially challenging since anonymous contributors ought to be welcome.

Agree and larger open source projects often have multiple gatekeepers checking for these issues or specific entities (like the eclipse foundation) who enforce strict quality processes and KYC on contributors. We have to create a Tezos specific process that puts some of the basic steps on chain.

I totally agree that it’s not a Tezos (or on-chain governance) specific issue but affects open source projects in general. But Tezos is THE project I am interested in and for industrial players to build with Tezos, the topic needs to be addressed for Tezos.