This decentralized application implements a micro funding protocol, where open sources of events can take place, working as an DeFi experiment, towards different economical arrangements.

Anyone, whichever community, can connect with it. Within it’s user interface or within the Tezos Blockchain. It empowers open sources of will to manifest themselves, intervening in virtual realities.

It’s an open source project and all it’s code is available for discussion, contributions and insights.

Some of its underlying characteristics: 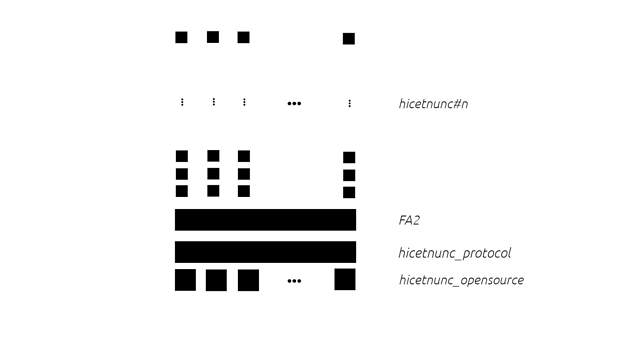 It’s architecture can be seen in the image above. Most of its smart contracts were written in SmartPy, and it’s source code is available here.

Features intended to be implemented in future updates are related to user connectivity from applications such as Thanos Wallet, Magic, as well supporting a variety of other smart contracts such as multisig wallets and blockchain domain names.

We are also looking forward to developing tools and smart contracts that enable these DAOs to provide services for it’s token holders.

The protocol supports invitations for users which don’t have ꜩ, making it possible for new users to engage with the community.

As it is, the protocol is upgradable in parts, which is something that is open to be discussed with the community. Funds can only be accessed by the administrator of each DAO. Oracle’s entry points might be updated to achieve an automated architecture.

It’s intended to allow interaction with social media from it’s UI, possibly determining a feed based on engagements.

There are some other infrastructural thoughts to be shared. Minimal interactions are required from the user, which triggers different states of the application. Meta transactions are forged and sent to an user to be signed in such cases. 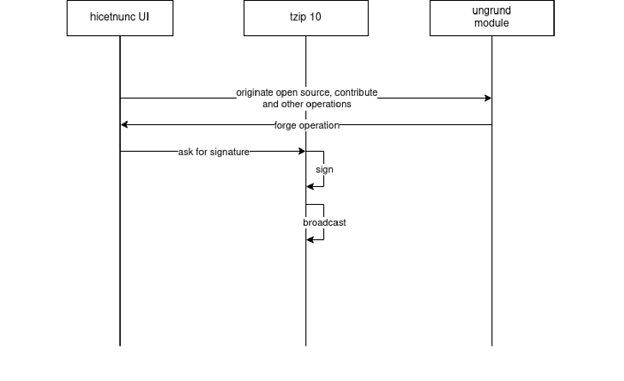 Operations are forged using information such as KT address, address, parameters and network.

This allows one to implement an API which forges different operations for a specific smart contract design.

The user interface code repository can be found on hicetnunc. Users are able to sync and interact with this decentralized application from AirGap wallet, using sign payload methods.

The off-chain worker (ungrund) is built with pytezos and it’s a microservice that supports users’ interactions. It forges transactions, interacts with other microservices (hesychasm), retrieving and inserting data from smart contracts. 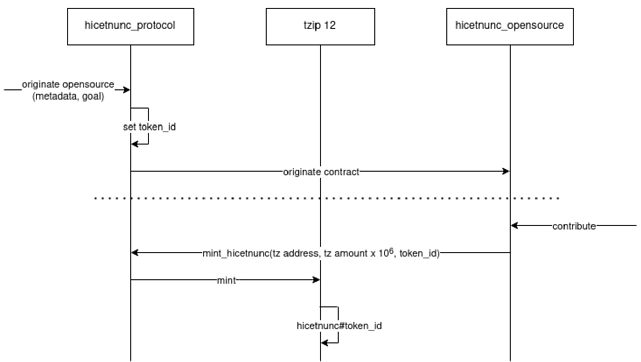 We are looking into making it as decentralized as possible. A lot of thoughts also came into our mind concerning the possibility of having an upgradable protocol for such dApp (core protocol and smart contract temporalities?). Still, such experiments can serve as a reference and other consequences can be derived from it. Comments are welcome.

This project is a Fourth Cohort Grantee from Tezos Foundation, being in continuous development/research.

The presentation is very abstract and I am having trouble understanding what the end goal of this project is.

A demo or an example would help me understand the project better.

Thank you for your concern. It seems to me that this piece is an important guide for developers in the Blockchain context for thinking smart contracts and dapps architectures. Some primitives of DeFi and DAOs were intended to be proposed and discussed, which indeed carries some game theory abstractions. I do agree though that user experience is an important way to grasp an idea, and such concern will be addressed in a near update.

Some points that I could highlight to reduce it’s apparent complexity is that design choices were made so it could offer you familiar tokens functionalities to the ecosystem, exploring their potentialities, resulting in a low cost infra (costing around 2tz to publish a DAO, while FA1.2 and FA2 costs 4tz+). (Such details can be seen on section “Carthagenet sample”), aswell enhancing PoS. It is important to notice that such infrastructure doesn’t charge any fees besides the ones established by the governance of Tezos Public Blockchain.

As such an important objective of this project is to empower users with reliable blockchain infrastructure from the Tezos Ecosystem.

If I still may add, I foresee the following use cases as examples:

I encourage any projects that have such interests in common, and beyond, to engage with what is being documented to help empower such DAOs.