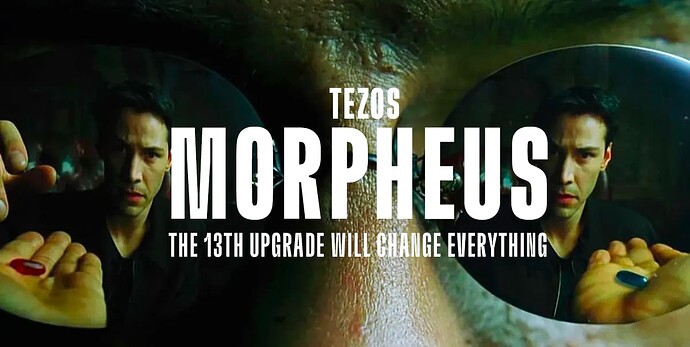 This proposal utilises the original M-proposal code from Nomadic Labs, Marigold, TriliTech, Oxhead Alpha, Tarides, DaiLambda & Functori renamed into a new proposal named Morpheus. It is being posted under Research and Development topic but we hope an administrator will post it under Proposals.

As usual, Morpheus’ ‘true’ name will be its hash, which is PtMorpFbzFFKWrvcjSCRgWgmYJY6ByPNrZMxJL5hUfU5ij4rYT6.

Following the Lima upgrade, the M upgrade for Tezos will be its 13th to date, and it is of great significance because of the innovation it brings. The name Morpheus is symbolic of the new path being carved by Tezos–by the Tezos community. Where so many choose to simply accept the state of things, we take the path less travelled. It is a confident name, and one that will immediately convey to everyone that this pivotal change is happening and it will forever change the state of things. It is time for the Tezos community to play a bigger role.

With respect to the name selection, historically this has been defaulted to the names of ancient cities. While logical, these names have not helped communicate the groundbreaking technological advances championed by the development teams. Although a name like Mumbai is nice and… expected, Morpheus brings the unexpected to Tezos. The premise of Tezos as a technology has always been one of revolution. Let’s choose a name that more directly communicates this rebellious spirit.

Morpheus is being put forth simply as an alternative naming option for the community to decide which name they prefer. Whereas in the past there was no choice provided, Morpheus changes this. In ancient mythology, the Greek god Morpheus shaped the lives of all; from the ordinary person to the highest royal in Greek myth. Morpheus brought dreams to the sleeping, which upon waking, would motivate them toward action. Our hope is that Tezos will do the same with this proposal.

What does Morpheus do?

Morpheus, if voted in by the community, would be Tezos’ 13th upgrade to date. The below is summarised from the technical information shared by the Nomadic Labs, Marigold, TriliTech, Oxhead Alpha, Tarides, DaiLambda & Functori teams in their shared post about the M proposal.

The Morpheus upgrade includes 3 major innovations and other improvements:

1 - Smart Rollups - the core development teams recently talked about Smart Rollups going live on Tezos. With Morpheus these will become a reality. Smart Rollups will unlock the ability for Tezos to reach 1 Million transactions per second.

2 - Faster Block Times - With Morpheus, block times are being reduced to 15 seconds.

To generate the Morpheus protocol, take the source code of the PtMumbaiiFFEGbew1rRjzSPyzRbA51Tm3RVZL5suHPxSZYDhCEc protocol,

and in the following file:

This change has no effect on the functionality of the protocol.

You can verify the new hash with

The new hash is:

After verifying, the hash can be replaced in the TEZOS_PROTOCOL file and other locations.