Description for PtSEBUHxx will be added by a moderator

Where do I read on what this proposal is changing?

I’d be interested as well, also for the other 20 proposals that where submitted alongside Lima.

This is just attention seeking by sebuh, he will deny or post some bs reasons but its all pr lol 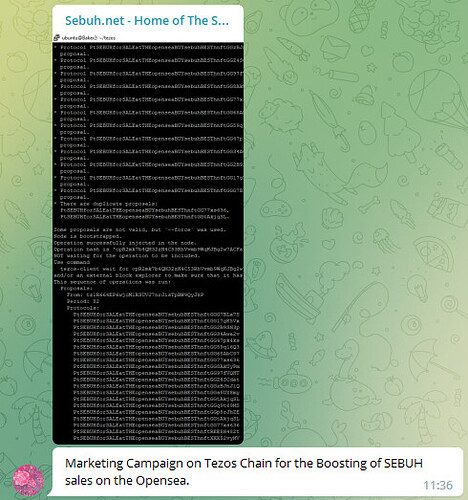 We need to change the protocol so that one posts a bond with their proposal and it’s sacrificed if the proposal does not get a bare minimum of attention.

“Disagree, everyone should be able to post a proposal without the need for a bond.”

Why? It is asymmetric. They get to take advantage of everyone’s attention, which is very expensive. Why should there not be a risk associated with that if it is abused?

Wait, why a transaction fee?

I don’t think legit / well thought out proposals should have to lose a bond or pay extra, just those that abuse the system.

We can avoid giving these spam proposals attention by explicitly labeling them as “spam” on agora and other frontends.

Whenever a real proposal (with code) is injected, it propagates through the p2p network.

To show the list of protocols known by the node:

A fake proposal with no associated code won’t show up there, so frontends can either mask it under a spam toggle, or avoid displaying it altogether. Unless I’m missing something?

I like that in the meantime but Ideally I would not like someone’s spam or graffiti to end up on the chain in the first place. At least give spammers some friction.