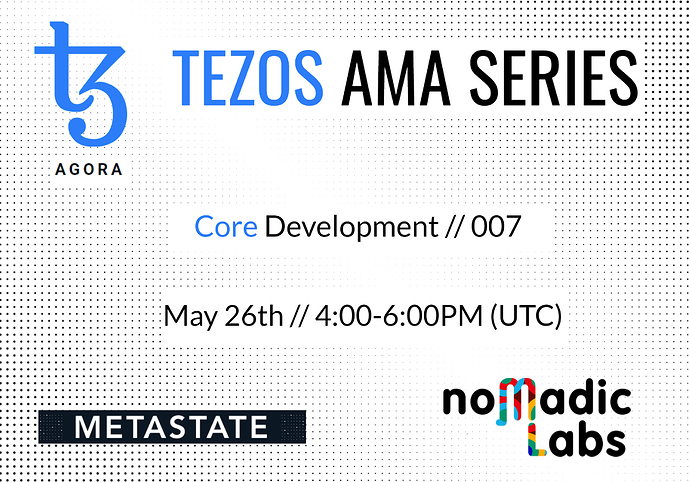 Tezos Agora will be hosting its second AMA with development teams that work on the core protocol.

Our participants for this AMA will include Nomadic Labs and Metastate

I haven’t seen a formal spec for 007. I am assuming Stateful Baking Accounts are being bundled as part of the proposal. And not your Programmable Staking proposal which enables in-protocol lending for bakers which would implode the fee market.

Adrian your initial spec on stateful baking accounts had the consensus key as non-spendable. https://web.archive.org/web/20200509165243/https://medium.com/metastatedev/stateful-baking-accounts-d483a63a173c

After posting the spec on Agora. Issues where raised around the consensus key being non-spendable. Your blog was then silently updated to make the key spendable but you made no mention of it on the Stateful accounts Agora thread, even though you were liking comment supporting a non-spendable consensus key. This comes off as dishonest.

“Note that one of the challenges of Stateful Baking Accounts is remaining as backwards compatible as possible in order to make the upgrade path a smooth experience. Thus, the consensus key will remain capable of authenticating spending as well as governance transactions. This ensures that bakers do not have to change their existing infrastructure.”

Unfortunately the consensus key is only spendable for backwards compatibility, and the intent is to still make it a non-spendable key.

So the question remains is the consensus key always spendable in this update, independent of the operator account? If not your proposal is fatal to the chain from a security prospective.

I would also like to see an answer to Justin’s question.

What I’m not clear on is where is the Tezos roadmap clearly outlined with past, current and future releases…

Thanks for your time and efforts! Could you tell us the difference between Metastate team and Cryptium Labs team? How do you split the efforts?

Well I’m going to ask the most obvious question: what’s the current state of the development? Is there an ETA for the new proposal?

The high level changelog is not written yet, unfortunately, but here are some links.

The place where you can best monitor the proposal for now is the proto-proposal branch. It already contains quite a lot of patches.

Most of what may end up in proto-proposal should already have a merge request.

Tezos should be very decentralised in order to provide true censorship resistance. The token/roll distribution tends to be more important than the raw number of bakers. For example imagine two scenarious where 1 baker has 91 rolls and 9 bakers have 1 roll each and compare it with a situation where there are 5 bakers and each one has 20 rolls. Even though the first scenario has more bakers, it is less decentralised than the second scenario.

tezos is not a just a single entity with only one dev team. there cant be a roadmap. only single entities in the ecosystem could make own roadmaps

When do you plan to start price discovery in proposal invoices given that you are FIAT-funded by the Tezos Foundation? In my view this (adding invoices to protocol upgrades) should only begin once there are no more fiat payments to the existing core development teams. Do you share this view? What are your views on this?

What is the long-term business model of Nomadic Labs? I assume funding by the Tezos Foundation will stop at some point in time.

Metastate:
[1] Do you see a conflict of interest in Cryptium being one of the world’s biggest for profit validator businesses and its spin-off Metastate being a Tezos not-for-profit-funded core development entity? Will you not naturally go and implement features that help your business, at the end of the day?

[2] What feature of those that you currently have in your pipe line are you most excited about and will this be something to be included in the upcoming 007?

The past protocols are listed in the Tezos doc, on the left there is a list under “Protocols” section. There are also several blog posts on the NL and CL blogs.
For future protocols there is no clear roadmap, there are different actors working on several topics, each with a slightly different roadmap. At Nomadic Labs we are mostly working on Michelson and Sapling for the next proposal.

For the current state of development I will refer to @klakplok 's answer below since he included the relevant links to GitLab.

It is difficult to but a fixed ETA on a new proposal, but we are getting closer every week to a few possible proposals for 007 (of course there could always be a secret one that I don’t know about that is injected tomorrow

). I think the ETA is going to be more on the order of weeks rather than months though. However it is important to remember that we are upgrading a live financial system currently valued rather highly and hence we are very focused on reliability and testing. A good analogy to think about upgrades is that we are currently all sitting in an A380 at 10,000 feet altitude and the core developers are upgrading the engines so that we can reach Mars instead of New York.

This answer makes it look like you have no interest in asking the tezos baker community for feedback and ideas for improvements, some might criticize you for overlooking features like a method to stop over-delegation ( which many bakers have been waiting for a long time, meanwhile, a tezos-fork has already implemented this ), instead, you focus on features no baker known to me has asked for, like Stateful Baking Accounts ( which is opposed by many bakers ), do you expect bakers to vote in favor of whatever you come up with, without question, if you do not listen to their concerns?

EDIT: to make a more concise question: given that currently your development efforts are funded 100% by Tezos Foundation ( presumably ) do you feel you have an obligation to the tezos community, or do you feel free to implement things that benefit big bakers like you more than small bakers?

Metastate is an R&D organization focusing on three key technical areas, which are core development (protocol and shell), programming languages (Michelson and Juvix), and cryptography (zero-knowledge proofs for computational privacy and compression).

We initially communicated about our work on Tezos using the Cryptium Labs brand. Cryptium Labs will continue to share information and communications related to its baker operations, as well as contents that are relevant for its delegators, such as governance activities.

Going forward, we will use the newly created Metastate profiles to communicate about our work in furthering the Tezos protocol and its ecosystem. In order to stay up-to-date on all our technical work (core development, programming languages, and cryptography), and our community development activities, please follow the profiles below:

I’d rather stay in the topic of this AMA, that is core development and 007.
We did answer similar questions about NL’s funding structure in our last AMA on reddit.