TZIP-15 is a new specification that proposes a standard for a transfer filtering interface, a common requirement for token contracts which represent real-world financial assets (e.g. securities). The idea of the interface is to propose a lightweight permission schema, that takes the form of user transferlists, i.e. lists of who is authorized to send and/or receive a transfer. For token contracts which use this mechanism, it is impossible for a user to send or receive transfers without being listed on the transferlist.

A transferlist (in other contexts known as a “whitelist”) is a list of pairs of userIds that are allowed to send and receive tokens, respectively. A mechanism is provided to assert that each transfer is allowed by the transferlist before it completes. A block of transfers can be asserted as a whole and will be rejected if one of the senders or receivers doesn’t belong to the transferlist.

Alternately, a restricted transferlist will generally behave as if its allowedTransferlists is empty.

This interface can either be used as part of a token contract (i.e. in a monolith configuration) or as a separate contract that is queried on demand.

Summary of the entrypoints

Here are the 8 entrypoints defined in the standard, grouped by category:

To illustrate how the transferlist works, here is an example of an assetTransfers call with several users and transferlists.

Consider the following setup where userId is a string and transferlistId is an integer:

Then suppose the following call to assertTransfers were made:

Thus the above call to assertTransfers will fail. 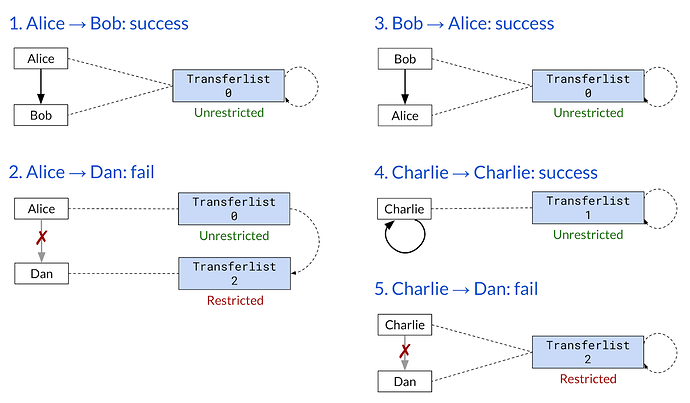 The full specifications are published on TZIP under TZIP-15, and we are now requesting comments from the Tezos community.

Below are a few questions that we are eager to discuss:

If you have any questions, feedback, or comments about this new specification, please submit them in the section below, or directly on the GitLab repo. The core behavior is implemented in Lorentz, SmartPy, and partially in LIGO. You can find the links at the bottom of the blog post.

A tutorial on how to use the transferlist is in development and will be added to the Assets portal soon.

Some implementations of transferlist contracts are currently under development:

Thanks to the teams at Neofacto, Tezos Paris Hub, and Serokell for their feedback on TZIP-15 to date.