Week of April 13 - Questions for The Tezos Foundation

As mentioned in our update last week, moving forward we will solicit questions from the community. If you have a question, please include below and we will do our best to answer in this week’s update.

Are there any plans to build a Stablecoin ? Are regulations a problem or do you “fear” coming regulations (speaking about the FSB Paper)?

Did you speak with Coase (Kathleen) or Arthur about the state of Wallets and Tooling around Tezos? If so, why didn’t you listen to what the two had to say?

Do you know what Arthur means with “veiled threats” ?

Ryan Jesperson will leave the board soon. Are there any candidates? How are the candidates selected?

Will one of the current board members fill Ryans President Position, if so who?

Why does nobody from the Foundation participate in Chats (Riot, Telegram)?

Are there any Plans to set-up a Community Treasury (for 3rd Party development funding decision making)?

Why didn’t you set-up 3 different Designs for the Tezos Foundation Website and let the community decide which Design to use?

How does a “normal” workday at the Tezos Foundation look?

Hello. Any update whether you have any plans to help folks who can not locate the ICO password? The tool you have build is extremely slow and I doing will help anyone. Recently the foundation announced they will settle an unrelated lawsuit for 25 million. We have been loyal to Tezos and not proceed it with a lawsuit but it is fair to be compensated at least what we invested. See what MakerDao foundation is doing with blackTuesday debacle. We deserve the attention of the foundation… any help is much appreciated!

The ambiguity around Arthur’s involvement with Tezos going forward is a concern. Will TF or him issue an official statement to clarify what’s going on?

What was the process for election of current board members?
What were the qualifications criteria for choosing the current board?
What method exists to ensure constant community voice in board decisions?
What in Ryan Lackey’s experience makes him qualified to be a board member and sit in 4/5 committees?
How much do the board members get paid?
How much of the board members pay is in xtz?
What measures have been taken to ensure no conflict of interest and/or self-sealing by each of the board members?
When will the next election process be communicated to the community?
Why has the community not been asked to participate or have any say/involvement in election of the next president?
What process has the foundation put in place to ensure a grantee is completing the work as promised?

Thanks for this AMA, much needed.

Those are the questions that crossed my mind. Sorry for typos.

Thank you for the initiative.

In the last bi-annual update, the Foundation stated it does not intend to sell any of its XTZ. At the same time, it has the single largest stack of any entity and keeps baking, making it only stronger on a relative basis. At some point the Foundation will be a central player with either enough to stop any proposals (basically filibustering) or even a majority holder, which clearly goes against the notion of Tezos being decentralized.

How does the Foundation intend to balance its XTZ holdings going forward?

(My stance is that the Foundation at least should start to burn its baking rewards, and generally prefer to burn rather than sell XTZ to manage its XTZ holdings until Tezos trading volume can absorb such a significant player selling without affecting the price)

How do you plan to move forward with those who can’t access their ICO wallets.? 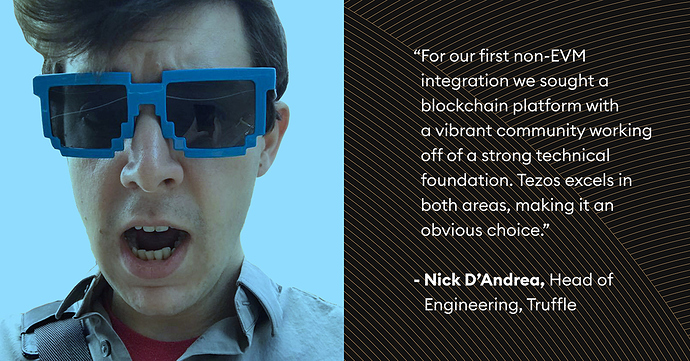 In case you missed it, Truffle announced that it is branching out to support Tezos on Wednesday -- you can read the original blog post here.

I would love to get a clarification on this as well… Do you even know how many investors have suffered from this? I’ve literally tried everything, without success. Instead of focusing on Governance, you should be focused on the community first. After all, what is there to govern if you have 0 community?
Sincerely,
Another Former First Believer in Tezos that Got Ripped Off by Tezos Itself

Regarding the last announced 25M$ lawsuit settlement, can you explain with a clear guideline how the Tezos ICO investors can join and participate of this settlement?