A recent article posted on Medium by the Baking Bad team essentially confirmed the results presented in the Tezos Agora post and made an excellent analysis of various implications (https://medium.com/bakers-summit/deflationary-baking-and-emmy-c-in-pictures-ea424a2e9ea7).

Perhaps it is worth to mention that:

There are still questions regarding the nature of the new reward system. For example how the formula was derived? using a global optimization method, a constrained minimization or a simple try and error? The issue is relevant from a practical point of view because the new reward model will increase the variation of the reward which will affect mainly small bakers. In this regard it is unclear whether alternative solutions exist, perhaps better or slightly worse but with smaller variance. It also makes one wonder whether the variance was included in the optimization process (if any was used).

This post presents in a simple form some results of a series of simulations showing how certain participants on the Tezos network with 8000 xtz, 40000 xtz and a lot of xtz, will see their stake increase over time under the current reward system (hereafter referred as BABY, reward: bake=16 xtz, endorse=2 xtz) and the the new one (CARTHA, reward: bake=40 xtz, endorse=1.25 xtz).

The following assumptions have been made:

The program, data files and figures are available at: https://drive.google.com/drive/folders/1L5F3cRHUOiL23ZYCoM5Ce2EXDfz9J_4z

Figure 1 shows how seven bakers who are staking 1 roll (8000 xtz) may see their xtz grow over time in the current system BABY and with the new reward system CARTHA. The grey line in the two panels illustrates the growth for a roll owner who delegates to a bigger baker (with 1005 rolls) and pays a 15% fee. The data file block4.dat from which this and the following two plots are made, includes the history of all 430 bakers. 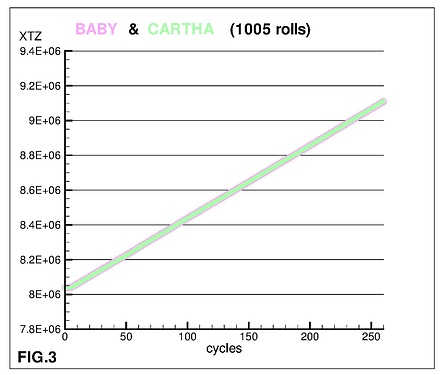 There have been some initial discussions on incentivizing new bakers by reducing the size of the roll. Figure 4 illustrates the hypothetical paths of 15 bakers starting with 1 roll made of 4000 xtz (data file: block4-4000.dat). 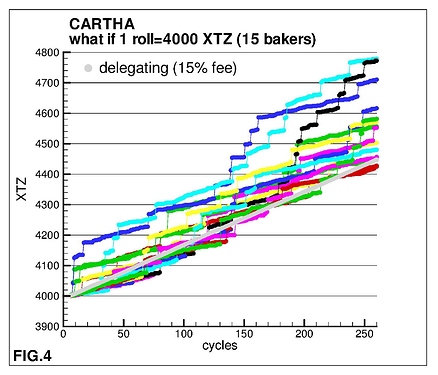 A belated comment on the CARTHA protocol upgrade. Theoretical studies are clearly necessary for the evolution of the Tezos network. Broad implications of translating such studies into upgrades should be carefully evaluated by involving the largest possible group of members of the Tezos community and also outside groups (e.g was the study on the new reward system peer reviewed?). This should possibly happen before the protocol is injected for the onchain voting.

Note that small bakers (57 bakers with 1 roll, 29 with 2 rolls and 30 with 3 rolls) constitute ~27% of the network (data extracted from Alex spreadsheet). In this regard pro-active support of small bakers should be pursued by any means necessary as priority number one. Simply Reducing the size of a roll under the CARTHA protocol does not seem a very attractive method to increase the decentralization of the network.
One possible way to do it is by delegating to small bakers a portion of the TF stake and, if needed, provide technical support to maximize their efficiency (the author of this post holds a bigger stake, hence there is no conflict of interest, and no benefit would be derived from this initiative).

Some of your graphs in Fig. 2 seem to be broken (also one Graph in Fig.1). They show equal or less rewards for small bakers compared to delegation (15%).

I would like to know more about the used numbers (in example; how did you calculate luck).

I suppose they show less because the delegator delegates to a large baker, implying that the variance in the new protocol may be so high that in the worst case, a small baker could earn less (at least for some time) than someone who stakes with a large baker who is not exposed to the new variance as a small baker. That is my take of these graphs.

But Fig.2 is a 5 rolls baker. I don’t see how such a baker should get less rewards (as with delegating to a 15% delegation-service) over a 250 cycles timeframe. That’s why it would be interesting to know, how this graph comes about. Is it really Carthage? Or just counted with very less luck?

That’s a good point. The compounded reward that is less than an integer roll has no effect, it is not delegated elsewhere. The assumption is enforced on all bakers. Reason? just because it is not simple to account such transitions in a small program, maybe in future. It is also not clear how many bakers actually do delegate the surplus in the real Tezos network. Maybe Alex can help to find out.

The whole exercise is based on random sampling weighted by the # of rolls, like in the real Tezos life. The program is available following the drive.google link