Around April I brought this up, but The issue was dropped(Reddit and Arthur fudding my idea). We seem to be progressing in the zsnark pools journey where a lot of money is being spent by the foundation on core development but nothing to bring in users that pay for dapps or directly supporting dApp development through grants(meaningful ones). It seems most of the money is going to sponsorships that have no KPI’s or obligations tied to them. Can we request that the foundation or nomadic inject a proposal to fund our favorite dapps with Tez that can help pay for their Layer 2 integration? This would really put Tezos in the spotlight as an on chain community governed protocol. I would hate to see this new tech go to waste like the zksnark pools did. Millions down the drain

Around April I brought this up, but The issue was dropped(Reddit and Arthur fudding my idea)

So Mack, how’s promoting scams (Luna) and then blaming TF for getting a phishing email? Tell us more about how you applied for a grant at TF to make youtube videos and got denied then proceeded to spread fud in certain telegram rooms. The fact that you are a bad actor and have always been a bad actor since they turned down your shitty youtube grant application speaks loudly.

Can we request that the foundation or nomadic inject a proposal to fund our favorite dapps with Tez that can help pay for their Layer 2 integration?

No one should trust you at this point since you can’t even tell a phishing email from a legitimate email (Hyper Bake anyone?).

I’ve no idea about Mack’s grant situation but IMO Luna wasn’t a scam, just a poorly designed thing, also many people have fallen to phishing emails, you don’t have to be rude

wrt the proposal, it looks like something that has no KPI’s or obligations tied to it, what apps should get it and how much should they get, do they need to move to l2 etc

you don’t have to be rude

Don’t be rude? We are way passed civility with Mack’s fud at this point. Just follow his twitter and it’s very obvious that all he does is complain, FUD TF/Arthur/Tezos.

Please call him out but beeing rude doesnt change anything.

You’re right. I will be more civil. Thank you.

I’m talking about dApps not getting the funding to build the layer 2(Deku). Just like Zsnark pools tech was wasted, I’m worried that Deku will also be wasted.

Not “fudding” anyone here. I see many people in the Tezos ecosystem talking about this issue and wanted to bring it up again. Yeah, I’m pissed off because Arthur dismissed my concerns about this months ago. I even see in the Nomadic post they are looking for builders to build on the testnet since the L2 is partially released. How can we get builders when a lot of dApps seem to be starving for funding?

If they only give grants for the dApps that have been well established on Tezos there is a much less likelihood they will run away with the money. Yes, I agree they also need proper KPI’s and a project management plan with milestones to report to the foundation for these grants.

Not sure how anything gets done here. As soon as someone voices a concern it gets attacked as “FUD” by you, Arthur or someone else. “keeping it real” and “voicing concerns” are not the same as “FUD”.

Nomadic listened to my concerns several times here, with regards to liquidity baking escape hatch, 15 second block time, and ghostnet. I was the original person to be loud about these concerns, and promoted them because no one else would dare speak against Arthur’s will.

Not sure how anything gets done here. As soon as someone voices a concern it gets attacked as “FUD” by you, Arthur or someone else. “keeping it real” and “voicing concerns” are not the same as “FUD”.

LOL so spreading FUD on telegram and twitter is the same thing as “voicing concerns”? Let me guess, the next thing you’re going to tell us is that SBF didn’t scam anyone and didn’t do anything illegal right?

I was the original person to be loud about these concerns, and promoted them because no one else would dare speak against Arthur’s will.

You sure have a funny appreciation of the timeline of events because you only started fudding around the same time your grant was denied based on what you said in the “therapy” channel. You are literally the “hero” no one asked for. Maybe you can convince Rocket Monsters to go rug their 4th chain or shill them some more and tell us why they’re not fraudsters.

TLDR - Mack was an impediment to the development of Ghostnet, not someone helping make it happen.

You got in the way of Ghostnet and the creation of a perpetual testnet ( along with everyone else from 2018 on who shared your grant paralysis views ) by saying it could not happen without being incentivized. Nicholas Ochem and I initially got the convo started for what became Ghostnet.

Nicholas personally spent his free time on it, and I put a bounty out to encourage a dev to develop the admin key function for it. That bounty worked and an anonymous dev came forward to write that code, and I paid the bounty.

You are paid by Tezos commons which is paid by the foundation.

Arthur said incentivizing the testnet would be a fork of Tezos. I said, “do you have any other ideas”? I was completely open to any idea’s because, I just wanted a perpetual testnet for devs. I didn’t “insist” it had to be incentivized. I just said, having all development paid through the foundation leads to political issues. Which is a issue I have run into over and over again here on Agora.

If you speak out against Arthur, or argue with what he says, you will lose your grant. This has been proven time and time again in the past. I’m not even talking about my grant, which I applied for to test the theory I had heard from other people who lost their grants after voicing concerns.

Anyways. can we get back on topic here?

Do you think offering and paying a bounty for Ghostnet were part of my job description or duties?

Yeah there is some overlap with work time I put on Ghostnet and my personal time, but there was plenty of personal time.

@trolleps sorry forgot to ping you

The grant was a test to see if the rumors were true. If speaking out against Arthur would cause you to lose your grant. I met all KPI’s in my original grant, and even exceeded them to a large extent.

From the moment Arthur posted this on reddit I realized what was happening and have spoken out against it ever since. 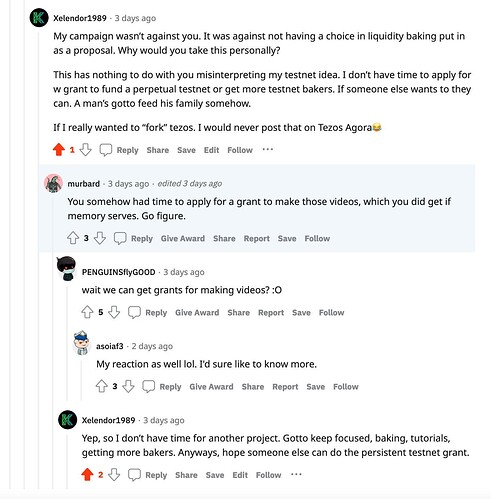 FYI my post today has nothing to do with any of this, I’m just bringing up an issue that I have seen pop up over the Tezos ecosystem the past couple of months that I don’t see him, or the foundation addressing. If no one builds on the L2 its a huge waste of core developer funding. So can we address how we will get dapps like Plenty, Tezotopia, Madfish suite, objkt.com, youves the funding they need to build on this amazing new tech?

If any dapps are receiving funding or building on it, I want to know more about it and how the progress is going. I don’t see any twitter posts or articles about progress.

I may be completely wrong in my assumptions here, and if I am I’ll take the verbal beating you and Jarrod are likely to give me.

Mack, Agora is also community moderated in that if anyone that is registered on Agora flags a post it will be hidden until an approved moderator reviews it. I have reviewed your previous post and approved it. I would suggest that you combine the posts. I would normally just merge the posts, however, out of caution since you seem to think someone is ‘censoring’ you, I am posting this in the open and letting you merge them yourself.

Sorry, it looked like an admin flagged it. Thank you for clarifying. I just deleted the duplicate post.

No, I think the idea you guys finally came up with worked really well. Ghostnet has accomplished what it set out to accomplish. I commend you both.

Regarding this, I was annoyed when Arthur accused me of “forking” Tezos when I was just trying to bring more light to the issue. I didn’t care about how it got done, and was just looking for ideas and support. I even said that in the initial agora post. I think you saying I was a “blocker” for the project is a bit of an overstatement. I would have loved to help with Ghostnet, but Nicholas ghosted me after Arthurs comment. I’m assuming it was because he was afraid to associate with me because Arthur marked me as a “bad actor”. It is what it is.

No one will debate with you when you make such outlandish statements as:

I would hate to see this new tech go to waste like the zksnark pools did. Millions down the drain

There is a sapling discussion going on litteraly this week, with people sharing recent developments and ideas. You are not taking measure of what’s happening in the open. Then you are claiming that nothing is happening and money is wasted.

If you speak out against Arthur, or argue with what he says, you will lose your grant.

There are 10 people sitting in the foundation technical committee, just go check the biannual report. You don’t have a clue how they deliberate. (neither do I). When my company applied for grants, I had multiple interlocutors. They are driven and opinionated people. You are disparaging them with your claims.

Sapling was introduced in 2019, and there is a meeting going on this week. Imagine we get the layer 2 tech in the Mumbai upgrade, and we start having meetings in 2025/2026 to discuss funding projects and development idea’s(after many projects have failed or left tezos).

Maybe it is time for disparaging.

In the link you referred to, it even mentions the points I make here, and only three comments. Wasted tech and core development time/money. Can we put some of that sponsorship money towards funding our dApps so they can attract users? If we don’t have VC’s on Tezos due to Arthur’s philosophy, the foundation should do more to help out, and not be spending so much outside of the ecosystem.

I’m not actually expecting anything to come out of this thread. Just hoping it sparks an idea in someones head who has the ability to change things. As they are now, things are looking bleak. Millions on failed sponsorships, millions on core dev work that doesn’t even have a use case(its amazing dev work, don’t get me wrong). Its time to focus on the end user experience, not just cool tech. If the cool tech doesn’t reach the end user what is the point? If millions is spent on marketing with no KPI’s, what is the point?