LB is making XTZ a store of devalue

@sophia @murbard it was supposed that the trading fee of XTZ/tzBTC pair would burn equally or if not more than what it was printed for the LB subsidy. But not even close: 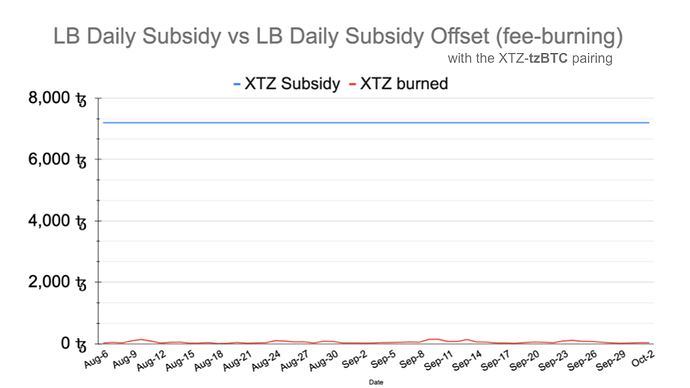 Can you guys answer why this goal hasn’t been met? Why we must keep allowing LB if the XTZ hodler is being sacrificed in the name of liquidity? There is no moral nor practical justification why we must keep subsidizing liquidity baking. The End justifies the means? When the means are the sacrifice of XTZ HODLERS, the end (liquidity) justifies it?

We, XTZ hodlers put our life savings on XTZ for being devalued by the constant dumping on the market from liquidity providers?

Now, when XTZ dumps in the market, it will dump way lower!

How you can still defend something like this? I was right in voting nay at the proposal period! Can’t believe i was actually convinced later that it was the right choice. I regret.

So not only, bakers closed their bakeries to go to do some liquidity baking, now the remaining bakers that are supporting the network are being dumped by the bakers that went to go to do LB.

This little experiment seems to have failed miserably. We are against looters, looting us through inflationary practices.

All bakers should create this file, vote.json with the following contents:

Then restart your baker and add the parameter --votefile vote.json

This will cast a vote to stop the LB when a baker bakes their block. Once enough bakers/block cast this vote, it can end early.

Thank you Krixt, i will do this today.

The right way to bring about a resolution in which LB’s fee-burning can offset (in part or in full) is through the on-chain governance process. The bottleneck is ultimately volume (trading activity). LB AMM fees are 0.1% * Volume. What you see is that the current pair has been failing on that level.

XTZ-USDtz on Quipuswap has virtually the same volume, but is achieving that with only 1/27th the liquidity of the LB AMM XTZ-tzBTC pair. This is for a number of reasons. It’s easier to get USDtz than it is to get tzBTC. So we can expect hat liquidity to grow significantly. I honestly believe enough liquidity will come in, that there will be enough volume to fully offset the subsidy.

Imagine if the XTZ-USDtz pair had that level of liquidity. If so, and without any other liquidity, a SIGNIFICANT part of the LB subsidy would be offset, if not all of it.

Another constraint has to do with the denomination, since on every other marketplace XTZ-USD(T) has 5x the trading volume of that marketplace’s XTZ-BTC pair.

So it’s not simply liquidity that’s constraining volume. It’s also just the wrong denomination for the job. BTC doesn’t get much liquidity compared to USD when it comes to XTZ trading pairs. We’ll have another shot at this soon. I wouldn’t get upset about the subsidy between now and then because it’s so small in the scope of things.

The amount of value that LB will bring to the Tezos ecosystem is so strong that it will be well worth that subsidy many many many times over, even though it’s not being offset by much now. Please consider the possibility the fact that there’s a reason for all this, and that that reason is worth it.

Until the next proposal period, let’s all focus on building out the infrastructure of support for liquidity baking, to bring volume up. Analytics tools, more wallet, and block explorer support. More data reporting. These are constructive positive things. There’s much more than can be done that we can all be working on doing.

The amount of value that LB will bring to the Tezos ecosystem is so strong that it will be well worth that subsidy many many many times over, even though it’s not being offset by much now. Please consider the possibility the fact that there’s a reason for all this, and that that reason is worth it.

I know you have been promoting usdtz, at don’t get me wrong, it might be much better than tzbtc in a lot of aspects. And i voted for it, with the hope, that it would fix the inflation generated by the complete failure of tzbtc. But even if the trading fee burning is getting back 50% of what is being printed, even if is getting back 80%, that 20% inflation, is making the whole thing, not worth it.

Right now, basically less than 1% of what is being printed is being burned. We should not keep supporting this until finally “something works”, when that will be? It could be in a year? 2 years? In 1 year they will be looting us via inflation little by little, is petty theft.

I have 130k XTZ losing value everyday due to this, I’m sure a lot of people will feel the same way as me.

it was supposed that the trading fee of XTZ/tzBTC pair would burn equally or if not more than what it was printed for the LB subsidy.

I mean, yes it was not. But you said that if it was to happen it could even create deflation. You are implying that it could happen, not guaranteed, but it could. But we are so far from that to happen, not even 2% of what is being printed is actually burned.

In that specific aspect, LB was a failure, so far. I mean, what value LB is proportioning to TEZ right now? How does very low trading volumes of xtz/tzbtc pair + the generated inflation gives XTZ any value from LB implementation?

In that specific aspect

The point of LB is not to burn tez.

“The point is to provide liquidity” liquidity that very few people is using, because trading volumes of XTZ-TZBTC pair are very very low.

What is the point of providing liquidity that is not used?

We can argue that the real point of LB is for a very few selected group of people in the form of liquidity providers is to loot us via inflation.

The “liquidity is the point” can be easily interpreted as “looting xtz hodlers is the point” and the common denominator is, that for achieving both, the means are the same, the sacrifice of xtz hodlers.

Nobody wants TZBTC, nobody wants to deal with a single entity that has to answer emails which takes eons to respond in order to mint or unmint. 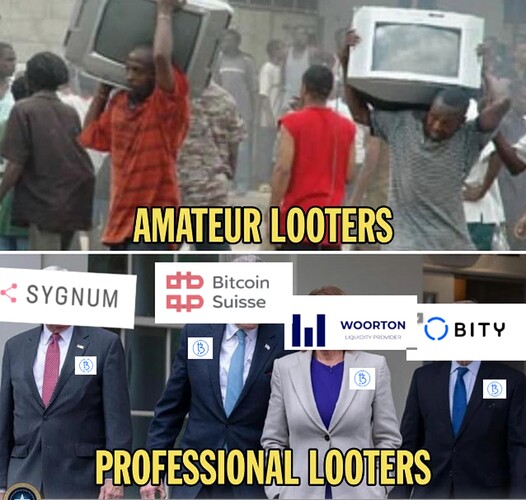 The point of LB is not to burn tez.

Arthur, are there any legal reason to prevent TF using baking reward as the LB fund instead of inflation ? Seems the TF’s own baking reward can cover the it already, or fund half LB reward from TF, this can be a first step of onchain treasure experience as well, and Tezos community will welcome this for sure.

@murbard, the point of LB is “to supply liquidity”

Or the point is

“To supply liquidity that is also actually highly used”

I made some basic calculations

There is 19M$ of locked liquidity for LB XTZ-TZBTC pair, there, ready to be used.

So, as you can see, we are subsidizing liquidity that is barely used. Why we need some LP’s looting us (all the TEZ Hodlers) via inflation if we are getting very little liquidity usage from it to facilitate XTZ-TZBTC exchanges?

@coredump Yes, that would be ideal, for someone else to subsidize it with their own pockets, (something that is barely giving any real value from the liquidity/trading volume perspective) instead of us subsidizing it with our pockets. Of course! I mean. Why we must sacrifice our own pockets for liquidity that is barely used?

Can the core devs explain why there was not an option to discontinue LB in the Hangzhou proposal?

For granda, it could be said that they did not know that it would be a disputed item. But such an excuse doesn’t fly for Hangzhou.

I feel quite disrespected that such an option did not exist.

I doubt they will answer you, they love the impoverishing inflation based subsidies.

This should really be a discussion about the progress of liquidity baking experiment, not jump into conclusions and come off as accusational. This doesn’t spawn constructive conversations.

It’s like calling someone an idiot and giving reasons based on X and Y premise but X and/or Y are just inaccurate. Nothing good is going to come out from this.

Fine, i agree and i apologize. But then we expect an answer. The nature of subsidies are immoral, they are a violation of the right of the individual hodlers of keeping the fruit of their labor, meaning property rights. Since is a imposition from the majority to the individual hodler. The majority is forcing the individual to fund via inflation something and the individual might not agree, still he is forced, is not voluntary and there is no way for him to opt out of funding the subsidy unless he sell his coins and leave the ecosystem.

Is not only immoral, is impractical, as we have seen time after time, in real world subsidies imposed by governments, they always fail, and they are a source of corruption and cronysm. This was no different in tezos. We have liquidity that is not being used, tzBTC is not an asset desirable by the consumer, otherwise we would see higher trading volumes and is not the case.

Is impoverishing the hodler with no real benefit whatsoever, the liquidity is not being used.

Tezos blockchain should have a strong constitution that forbids the collective to violate property rights to the individual, not only by the confiscation/expropriation of assets which are basically taxes at 100%, but also including monetary emission tactics that tax the individual at a partial %.

Oh @murbard, but when the individual hodler is expropriated willy-nilly via monetary emission, you support it. But not when is about to burn TF coins or your coins. That’s a double moral.

We are already the bolsheviks thanks to LB.