Here is an FA 1.2 coded in isomorphic Python, it relies on Python’s native AST module and the excellent PyTezos:

This file has been truncated. show original

What do you think?

Much more pythonic than SmartPy

Will def. look into using this when it’s feature complete!!

This is really excellent work, really stoked to see where this leads, could become the no1 SC Lang for new devs

Looking forward to your feedbacks. 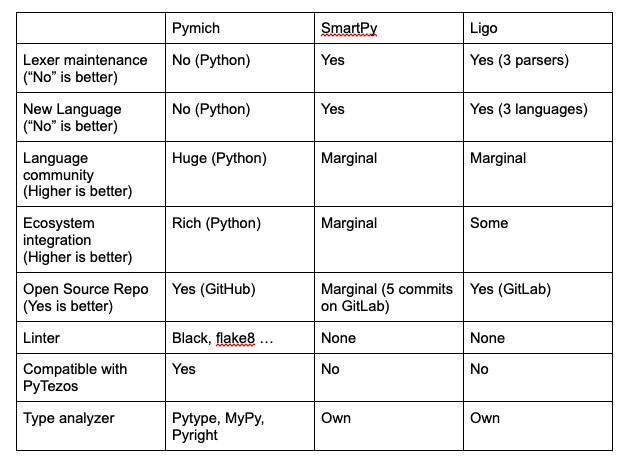 You should remove the (X is better) from this image, it makes it feel like an advertisement lol. It’s also a bit biased but I’m sure you can see that. Also, it looks weird to imply that SmartPy isn’t python. Deep devs will understand that you’re technically correct, but it might cause confusion overall.

Just go toe to toe directly with SmartPy and you’ll likely win (longterm) just because people will finally be freed from sp.* notation. The “python vs pyMich vs Smartpy” is a much better graphic to highlight. There’s no need for the extras imo, let the tech talk.

PS: Don’t underestimate the power of LIGO and functional programming either. There’s a huge library of battle-tested contracts in the wild to learn from if you know CameLIGO specifically. That type of thing will be super important for adoption of your language. Starting devs don’t want to make custom contracts, they want to fork audited and tested contracts until comfortable enough to start building custom ones.

Hi, I represent the interests of a cryptocurrency fund, how can I contact the developers? Unfortunately, I cannot write you a private message, and I have not found other sources to contact you.

My Linkedin is Bilal EL ALAMY

This is awesome! So much more approachable than SmartPy. I’m excited to see the progress. Do you have a grant/funding/team?